Yet another CFL characteristic

We have addressed the issue of the toxicity of "Mercury Bulbs" (CFLs) in several posts. In meetings with many Electric utilities it was acknowledged that the CFL is considered a stop-gap solution until a better technology is available. In an "off the record" phone call with an EPA official we were told that CFLs were resulting in a "pending environmental disaster". Yes, we wrote it down and date and time stamped it.

Over the last few months Vu1 has been contacted by two major museums. One is a well known natural history museum and the other is a museum of art in a large U.S. city. One contact was from a Lighting Director and the other from the Associate Curator. Both expressed great interest in Vu1's ESL lighting as an "accurate and high quality" and "safe" lighting for exhibits and artwork. The museum of art brought to our attention the ultraviolet (UV) generated by CFL bulbs and their damaging effect on artwork. The museum cannot use CFLs due to the UV risk and they said they hated the light quality of LED bulbs. They are being mandated to install energy efficient lighting but feel they have no options with existing technologies.

We are hoping to be able to solve this dilemma for museums with the release of our first ESL reflector bulbs; in the meantime we started looking into the issue of UV. There are number of articles that have been written on the health impacts of CFLs for people that are UV sensitive. CFL lights should be recognized as “a potential risk factor in the aggravation of existing light-sensitive symptoms in some patients with diseases such as lupus, porphyrias, genophotodermatoses, actinic prurigo, chronic actinic dermatitis and solar urticaria”. European Commission – Directorate – General for Health and Consumers

Also interesting is the impact of UV light on plastics. Unfortunately, many light fixtures and lamp shades are made of - or incorporate- plastics. UV has a tendency to attack plastic. There is an excellent article entitled “UV Properties of Plastics: Transmission & Resistance” written by Zeus Industrial Products. This article highlights how -

“All types of UV can cause a photochemical effect within the polymer structure, which can be either a benefit or lead to degradation of some sort to the material. Note that compared to our skin, the higher energy UVC is more likely to affect plastics. The main visible effects are a chalky appearance and a color shift on the surface of the material, and the component surface becomes brittle.”

The result can be as pictured below. The lamp shade in this picture was a premium priced shade that had been enclosing a CFL bulb for 24 months. The plastic liner of the shade became discolored, brittle and then essentially shattered. Stay tuned for many more damaged fixtures and lamp shades as the use of CFLs become more common. 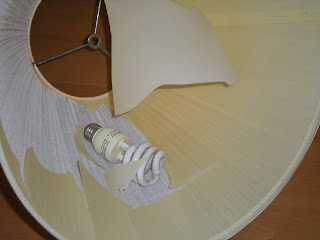 Lastly, we were at a friend’s home on Christmas Eve. Their 8 year old came running into the kitchen exclaiming that “something is burning and smoking by the Christmas tree”. We all ran into the room and were taken aback to find that the burning and smoking was coming from a spiral CFL bulb that had just died a painful death in the table lamp next to the Christmas tree.
Posted by Vu1 Marketing Team at 4:45 PM